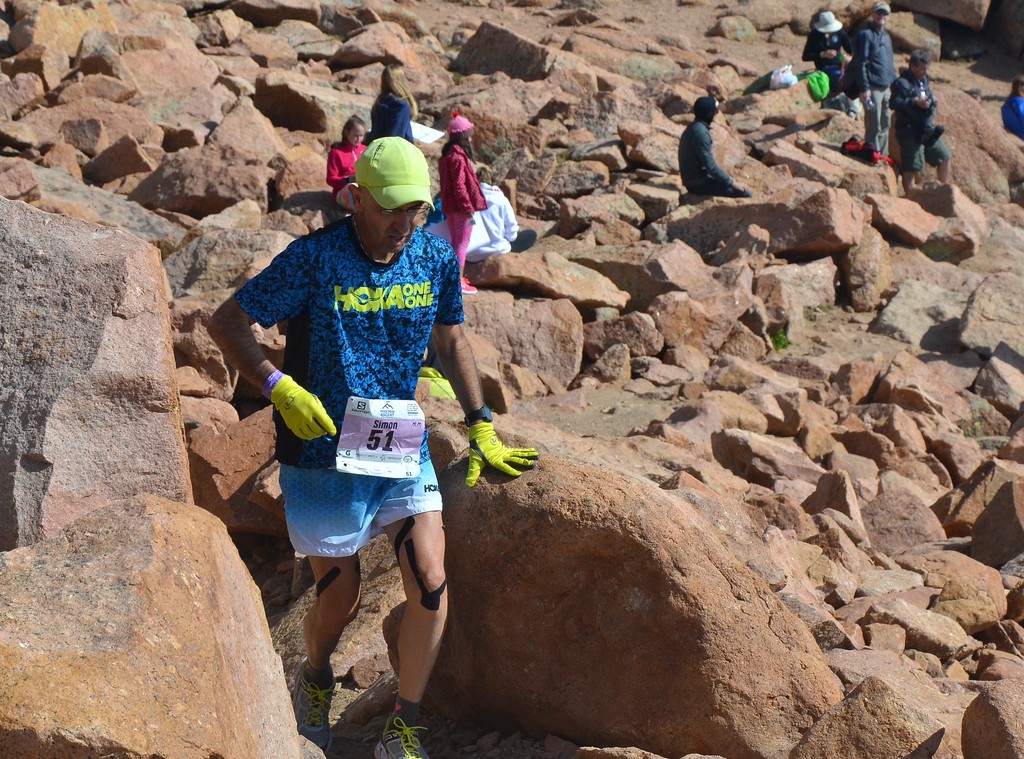 He missed the race last year due to injuries with his right leg.

“On my first training run last year I fell two minutes from the summit,” Gutierrez said. “I had a hairline fracture in my tibia and stretched my PCL.”

A physical therapist, Gutierrez moved from Colorado Springs to Alamosa, Colo., in December.

“I got a great job offer from a former employer and that puts me closer to family in Albuquerque,” Gutierrez said. “I miss the community here, but I’m happy. I got to see a lot of friends here at the race.”

Gutierrez said he’ll be back.

IMPROVING SPANIARD: Jan Margarit traveled from his home in Spain to finish fifth in the Ascent in 2:25:39.

“It’s so hard to breathe” running up Pikes Peak, he said. “I had to stop to breathe two or three times.”
He finished eighth in the Ascent in 2016 (2:29:36), so he improved three spots and by nearly four minutes.

“I’d like to come next year,” he said, noting that he has a sponsor that came with him. “I want to try it again.”

MEDICAL TEAM ON HAND: Ascent champion Joe Gray was in anguish when he crossed the finish line Saturday and within a couple of minutes, he asked the medical staff if he could get an IV. The medical staff was on the spot to attend to Gray’s needs immediately when he finished the race.

Dr. Doug Bradley, the medical director of Emergicare Medical Clinics, said he had a staff of eight – including two physicians – at the Pikes Peak summit to care for the 1,800 race participants.

“We’ve been doing the race for about 10 years,” Bradley said. “We enjoy it. These are very healthy people.”

Bradley said his staff treats about 5 percent of the runners.

“Most of them grab their bags and get on the van and get off the mountain pretty quickly,” Bradley said. “When someone needs treatment, we’ll give them oxygen, warm them up with a blanket, hydrate them with Gatorade and maybe give them an IV.”

When most of the runners had completed the course, Bradley said it had been a typical day and reported no serious ailments.

LONG TRAVEL FOR FIRST ASCENT: Adam Szczepanski had often heard of the Pikes Peak Ascent – and he wanted to tackle the challenge.

“I consider this the pinnacle of trail running, said the 37-year-old who lives in Hamilton, about 30 minutes from Toronto, Canada. “The height of the mountain and the following it has, especially in America, makes this special.”

Szczepanski said he’s been running for 15 years and became a trail runner about six years ago. He said eight Canadians came for the weekend races, and four were in the Ascent.

Training for Szczepanski was a problem, he said.

“There’s nothing you can do,” he said, noting that the elevation in his hometown is 600 feet, about 6,000 feet below that of the starting line in Manitou Springs.

Szczepanski said his hand was numb for about the final four miles of the Ascent due to lack of oxygen. Still, he thoroughly enjoyed the experience.

“It was fantastic,” he said. “They have lots of volunteers and the wave system they use at the start makes a lot of sense. I was in the sixth wave and passed most of the them in the fifth and fourth waves.”

“I’ll come again,” he said, “maybe a week ahead to get more accustomed to the altitude.”

Szczepanski said he was amazed by all the tourists, most of whom were in the Pikes Peak region for events other than the race.

“There are so many things to do in this area,” he said. “I figured with the mountains there’d be somewhere to climb, so I brought my climbing gear. I’m planning to do that (Sunday) at Garden of the Gods (Park).”