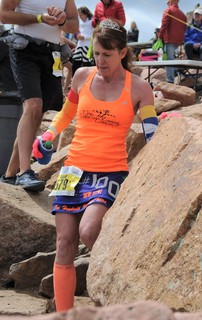 When it was time for Angel Brock to choose the marathon that would be her 100th, she came home to the Pikes Peak Marathon, the race that challenges her the most.

And while the round-trip to Pikes Peak's 14,115-foot summit and back is a goal race for many, Brock wasn't done. Since then she has completed three more marathons and now hopes to qualify for Boston and New York.

Brock has also knocked off a 100-mile ultra, the Rocky Raccoon 100 in Texas, and finished multiple 100K, 50-mile and 50K races. She once ran three marathon’s in three days. And she has peppered her resume with seven Pikes Peak “doubles” - running the Ascent on Saturday and the marathon on Sunday. Brock, 48, accomplished all of that and much more in nine years. She has lived in Las Vegas, Nev., San Angelo, Texas, and Ft. Walton Beach, Fla., but Fountain has been her home for the past 19 years. Her running story began as any story should … with ice cream. You can tell she had fun answering our questions.

The 2017 Pikes Peak Marathon was your 100th marathon. That's a lot of miles. How did this journey begin? August, 2008, I was eating a sundae talking with my cousin Connie. She told me she had to run 10 miles later, I didn't know people ran that far! She told me she had already completed two marathons. She had to tell me what a marathon was. I was blown away. No way could I ever do that! After all, I hated running. She then told me there was this thing called a half marathon. Something just clicked ... maybe it was a high from the hot fudge, but I thought, "I could do this."

I had turned 39 in June and I thought it would be a good goal for my 40th birthday and a great way to get my heart healthy as I was not active at all. The next day I went to a running store in Las Vegas and got fitted for shoes. Two days later when I got home I started the Couch to 5K program. My first 5K was the Komen Race for the Cure in Colorado Springs. I remember race packet pick-up instructions where I was supposed to pick up a bib. I couldn't figure out why they would be giving away baby bibs. I still smile every time I pick up a race bib.

More than a few runners are one-and-done after their first marathon. What kept you moving and motivated to train and race? That's a good one! My sister told me about the Zappos Half Marathon in Las Vegas (at that time it was in the morning in December.) It was sooner than expected, but how cool would it be to run where I once grew up?  I finished my first half marathon in December, 2008, six months ahead of my 40th birthday.  After another hot fudge sundae, I figured since I had all the extra time, I might as well train for a full.  I did honestly think it would be a "one-and-done" event for me! I even guilted my mom into coming to watch the historic event. I laugh about it now, my mom quit coming to my marathons after the fifteenth or sixteenth one. I also said no more after my first Ironman finish and Pikes Peak Double. I am motivated to train because I sign up for races - a lot of races - and I hate to waste money!  Also if I call it "training" instead of running, it takes the sting out of it, that and wearing cute running skirts! I also have a treasure chest full of medals I adore!  My Pikes Peak medals though are proudly displayed on my wall. 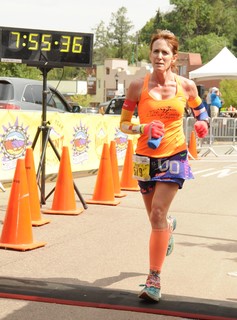 Why did you choose Pikes Peak for No. 100? The timing fit ... lol. Really, I chose Pikes Peak Marathon because it is my favorite marathon.  It is the most challenging marathon I accomplish every year. I chose Pikes Peak because back in 2009, when I learned of the Pikes Peak Marathon, I told my cousin, Connie, I would NEVER do that one, those people were crazy!  Of course, there Connie and I stood in 2010 at the start line of our first Pikes Peak Marathon! My friends and family no longer believe me when I say "I will never do that,"  as I also said that about Ironman and the 100 miler. And my friends (David, Joy, Patti, Robin, Beth) wanted to be here to help me celebrate and participate in the races.

Tell us about your favorite moments from Pikes Peak 2017.  Some of my favorite moments are John O'Neill (from the Colorado Running Company) giving me a special tank to wear for the race with "Pikes Peak is my 100th Marathon" on the back.  My friends (some from Texas) coming to celebrate the weekend with me.  My friends presented me with a gift after I finished Pikes Peak Marathon - couldn't believe it and it made me cry - they had all chipped in and bought me the Garmin 935 watch.  Even my tri coach and friend, Nate Dicks chipped in so that he might finally get some data on my training..lol

Running the Ascent with Robin and Beth and getting beat by Robin by 1 stinking second!  Marathon race day and all the sweetest runners and volunteers congratulating me!

You're running down the Ws and then Ruxton Ave. to the finish.  How are you feeling and what are you thinking? I'm feeling some relief of no longer having to navigate roots/rocks, relief that I will make the time cut off, and a bit nauseous as I was running max effort down the hill to the finish. My lungs and legs were asking me to stop and walk it in, and, as always, my heart took over to the finish. I was thinking that I had lied earlier in the day around A-frame when I told myself (for the seventh time) that if I made it before the cutoff I wouldn't have to run Pikes Peak again. The people who embroider my Pikes Peak Marathon jacket every year do it small so there is plenty of room for many more years. I was thinking how grateful I was to have my friends and family to cheer me on, how grateful I am for my ability to do these types of races,  I was thinking about how lucky I was to be able to finish my eighth Pikes Peak Marathon and seventh Double, and without injury! I was thinking how special the moment/accomplishment was and how I had accomplished the goals set for 2017 up to that point. I was thinking about all the friends I have made and all the cool places and states I have also got to run . I was also thinking about what I was going to eat for supper and dessert(s) :)

And this was your eighth Pikes Peak marathon finish and seventh double.  What keeps you coming back to Pikes Peak? The snacks at the aid stations! Pickles, red grapes, and Coca Cola always taste better on the mountain! I am "geared" for challenges. I would feel guilty not doing the Pikes Peak Marathon because I have the ability to do it and, like I said, I hate wasting!  Of all my accomplishments, my jacket with the race years embroidered always gets the most respect and kudos when I wear it to out of state races. That makes me proud of myself. One time I was looking at Pikes Peak from Fountain and I commented to my son Jack, then about age 9, that I couldn't believe I had run Pikes Peak. And my son said, "I can, because you're my Mom!" This still makes me smile. 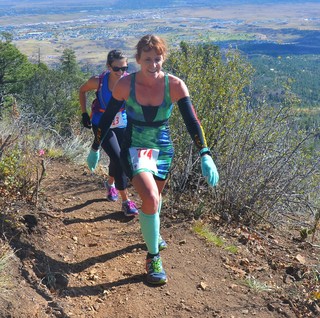 If you could relive any moment in your running career, what would it be? The Bear Chase 100K finish, 2013. Cutoff time 15 hours, which was a challenge. The only other 100K I did took me about 22 hours. I was fighting cutoffs the last 24 miles or so. I was the last one on course with my pacer, Joy.  The volunteers were radioing ahead, they sent a cyclist out to see if I was "running." They wanted to pull me from the race.  I kept running only because of my friend, Joy. I didn't want to disappoint her and cut her "pacing" miles with me short.  I was on pace to miss the cutoff by about 10 minutes.  The last three-to-four miles I just kept jogging trying to be at peace with finishing after the cut off.  I just wanted to be done. When I neared the finish, maybe 1/4-mile away, I hear yelling.  They are yelling at me to move, run!  I look at my Garmin ... I was shocked. I had a couple of minutes before the 15-hour cutoff.  I RUN - probably a 14-minute pace, but felt like 6-minute pace.  Wait, I don't know what a 6-minute pace feels like. Maybe like a 9-minute pace. I finished in 14:59:10 and won the "Bearly Finished" trophy, probably to the disappointment of the second-to-last finisher.

What other races do you enjoy and why? I enjoy the Rock 'n' Roll Las Vegas Marathon because I think it's cool to run past the Circus Circus where I used to go as a kid, even lived next door to the guy who built the Circus Circus sign. I have also enjoy the Cowtown 50K in Fort Worth and the Route 66 Marathon with the Center of the Universe Detour in Tulsa, Okla. I also enjoy Ironman, the Florida Ironman is my favorite because I really do feel like I am on vacation when I'm there!

What are your favorite running trails in the Pikes Peak Region? I do most of my training indoors now in my garage while watching Netflix and Youtube ... I know ... I do like Barr Trail and I like the trail behind Fountain Regional Park. There are a few trails around my neighborhood in Fountain I like.

103 marathons down and what comes next? Trying to get into Boston and New York.  I qualified (twice) this year for Boston, but missed entry by 1:45 under my qualifying time. I would like to run a marathon in every state and Washington, D.C. I will do some of it the "hard way," meaning by doing an Ironman in states I have not collected yet. This is how I collected Idaho, Wisconsin, and Florida.  Next year I hope to collect Kentucky. And of course hopefully finish my eighth Pikes Peak double in 2018.