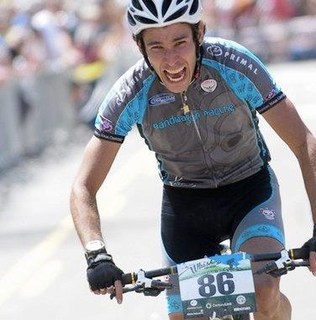 By Mary Topping
A mountain biking superstar just dropped into Colorado Springs from Colombia. Hector Fernando Riveros Paez – he likes to be called Fernando – rides on the Colombian national MTB team, is a former Colombian national champion, and a top ten finisher in the Pan American Games. He now rides on Doug Johnson's Bandwagon Racing team.

So what’s he doing in Colorado Springs?

He fell in love. Riveros met Victoria, his wife of five months and a Texas native, when she worked as a chiropractic intern with the Colombian Olympic team in Bogota, Colombia. “The first time I saw her I was in love and knew that I had to meet her,” Riveros said. “So my doctor introduced us and we were engaged four months later.”

It’s hard to say which prevails as his greatest passion – Victoria, endurance mountain biking, his teammates, or his family.

Family in Colombia
With a father in the military services, Riveros lived in different parts of Colombia as a kid until his family settled in Bogota when he was sixteen years old. That’s when he started mountain biking. One year later he would raise his arms in victory as junior Colombian national champion.

Riveros graduated from high school and studied film/production in the university. With one year remaining to graduate, he decided to follow his professional mountain biking dream. 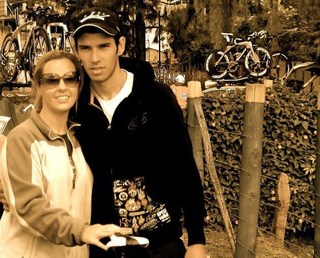 He said his dad helped him get a start in the sport; the elder Riveros also guided his son in a particular direction. “I initially wanted to be a downhill biker, but my dad told me ‘no’ because it was for lazy people,” Riveros said. He turned professional about two years ago at the age of 22.

Riveros’ parents are both retired. His mom worked as a senator in Bogota. Calling his sister’s two boys “his life,” Riveros’ extended family means the world to him. He grew up with 19 aunts and uncles and treasures his relationships with them as well as his cousins; he visited his Abuelita (grandmother) weekly. “Our family reunions are crazy but full of love,” Riveros said.

Racing with Bandwagon
When Johnson, Bandwagon Racing's founder, described Riveros, he said, “He’s got a big heart.” Riveros invests that heart in his racing, where he rides to win and do well for team and country. In April he won the Pueblo Voodoo Fire 66 mile marathon event in four hours thirty minutes, beating second placed Kalan Beisel of Colorado Springs by one minute 30 seconds. Riveros also brought home this year a strong second place in the 50 mile True Grit in Saint George, Utah. 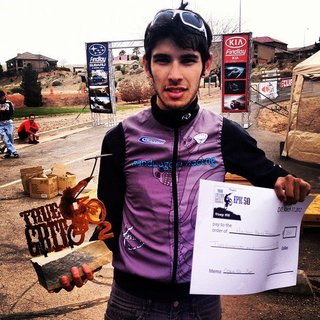 Cyclists on the trails around Monument, Williams and Captain Jack Trails, and the paths of Palmer Park often see the six foot, 145 lb. Riveros because these trails feature among his favorite places to ride. While Riveros said he likes all races because he simply loves to compete, he especially enjoys competing in World Cup events and the Pan American Games because of the high level of competition those races attract. This year he finished sixth in the Pan American Games, with a seventh place in 2011. He also won the Copa MTB Valle de Ubate this year in Colombia.

Riveros identified climbing as his best skill on the bike. He relishes powering uphill – implying that the skill runs in his Colombian blood, and it’s where he often crushes the competition. “The steeper the climb the better,” he said.

Many bike racers practice certain rituals before a race. Johnson described one of Riveros’ habits: “He eats sushi before every race. He’s done some World Cups; he told me a bunch of World Cup guys ate meat or sushi before races, so he thinks it’s a good idea. Literally 15 minutes before a race starts, whether it’s 7 a.m. or later, he will have sushi.”

American food culture has already crept into Riveros’ diet. His favorite guilty pleasure food? French fries and Frosted Flakes. At home Victoria cooks often and Riveros handles the Colombian food section of the menu. “We love arepas,” he said, “which are corn cakes, ajiaco soup which is a specialty in Bogota Colombia that has chicken, potatoes, rice, avocado in it, and patacones which are fried plantains.” Big ambitions
When asked what he likes about racing with Bandwagon, Riveros replied, “I love my teammates. Everyone is so supportive of me and we all have a special bond and friendship.” Teammates would include Johnson, who continues to race.

Johnson said, “We lucked into having Fernando on our team. The team is growing every year, though our budget is low compared to what someone like Fernando should be making. But he likes me. He is loyal to the team and to a fault, and wants to help the team grow. If I can’t get him a decent salary for a cyclist of his caliber, I would help him get another deal or team.”

And there is a chance that Riveros will stick with Bandwagon. Johnson confirmed this week that he is close to securing the kind of financial backing needed to keep the Colombian superstar on the roster for "a couple of years."

If that doesn't happen, there will be plenty of teams waiting in line to sign him. Riveros is clear about his goals. He aims to compete in the Olympic Games and become one of the top 10 mountain bikers in the world. And he can see himself moving on to a larger team, naming Specialized, Orbea, Trek, and Scott. He recently beat more riders from those teams than those who crossed the line in front of him by taking fifth at one of the most prestigious U.S. mountain bike races, the Whiskey 50.

With that Whiskey result and his other recent palmares, no team will be able to resist falling in love with Fernando Riveros.