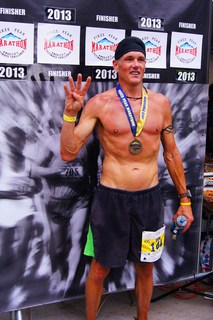 By Bob Stephens
PikesPeakSports.us
Don Solberg jubilantly held up four fingers to friends and family, which signified the achievement of his goal – and the end of his frustration.

As the 44-year-old celebrated, other runners were still crossing the finish line of Sunday’s Pikes Peak Marathon, though it took them more than five hours to complete the mind-numbing, body-ravaging race up and down America’s mountain.

“I’ve been trying to break five hours since I started running this four years ago,” he said. “This is huge for me.”

Solberg crossed the finish line in 4:45:39, while setting personal bests for the uphill and downhill portions of the 26.2-mile race. He accomplished the ascent in 2:58:01, a full 19 minutes better than a year ago.

How did he improve so much? Solberg attributed his faster time to more speed training.
“Last year I just worked on the mountain,” he said. “I did more flat work this year, more speed work. I felt the difference.”

He has a tattoo of Pikes Peak with “14,115” – the elevation of the mountain – on his upper back. Clearly, Solberg felt like he conquered the big hill Sunday.“It’s outstanding. I don’t know if I’ll ever repeat this,” he said.

Solberg is in the business of helping save lives. For 11 years, the last five at Penrose-St. Francis Hospital, he’s been a flight paramedic.

“I’ve been so nervous all week,” Solberg said. “My family’s been here all week from Arizona. This is just a great day. I beat a lot of good runners. This could be a once-in-a-lifetime thing for me.” 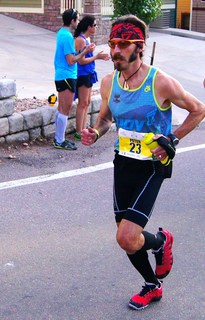 HIGHER GOALS: As Peter Maksimow studied the times of top finishers in the Pikes Peak Marathon, he was congratulated for finishing second in his age group. That was small consolation for the charismatic 34-year-old, who battled injuries and a lack of training as much as the mountain and other runners while finishing 17th in 4:29:54.

Maksimow has finished in the top 10 all four times he’s run the Pikes Peak Ascent (2003, 2010-2012) but knew it was an uphill battle to duplicate that success.“I’m not in shape; I’ve been injured for about a year-and-a-half,” Maksimow explained. “I started training again about three weeks ago after taking a month off.”

He developed plantar fasciitis in March 2012 and, while compensating for that problem, began suffering from Achilles tendinitis.

Despite the discomfort, Maksimow maintains his upbeat, friendly persona that helped him become president of Team Colorado, a USATF outfit that includes Alex Nichols, who was runner-up in the Marathon on Sunday.

“We all have a love for the sport, for the mountains,” said Maksimow, who sports a mustache worthy of Olympic gold.

Maksimow works at Colorado Running Company, and for Running USA, a Colorado Springs-based company. He also coaches individual runners.Maksimow has competed in the Ascent or Marathon since moving back to Colorado Springs from Vermont, where his wife Nora is from.

He knew the training for this weekend wasn’t what he wanted. “The hardest thing is not being prepared for it … mentally,” he said. “Physically, I knew I wasn’t ready. This is 15,000 feet of gain and loss. There are a lot of facets to this race.“It’s quite an experience. It’s a bucket list thing, for sure.”

BLOODY FINISH: The nasty fall occurred about a mile before Barr Camp during Cameron Clayton’s descent down Pikes Peak.

“It was a clear place, the kind where you get complacent,” said the 25-year-old resident of Boulder. “I was thinking, ‘Churn and burn,’ and that’s when I caught a little pebble and went down.”

When Clayton crossed the finish line in Manitou Springs, there was blood on his face, both arms and both legs. Medical personnel were quick to converge on him and offer assistance, which he gladly accepted.

“Once I got in fifth place, I just stayed there,” he said. “I’m good at descending and I was hoping to make up some ground and move up when I went down.”

Blood and a nasty scrape were above his right eye, and he received treatment on both hands, elbows and knees.

“I got my hands out but not far enough,” he said. “I’m good at tucking and rolling, but not this time. That was a face plant. If this was a training run, it was something you’d take 10 to 15 minutes to recover from.”

Instead, he was up quickly and again headed down the mountain.

“I had a headache and lost a little bit of vision in my right eye for about 30 minutes,” he said. “It’s returned now. I’m OK, but I was worried a little about a concussion.”

It was Clayton’s first time to enter the race but he called it “fun” and said he’d return despite suffering the hardest fall he’d ever had.“It was an adventure,” he said with a smile. “It wasn’t a terrible first experience. I’m alive.”

Tim, thanks for all your hard work and outstanding coverage of these races. They're already special and rich with history but you add the icing on the cake.  I know I speak for so many people in the area. Always enjoy seeing you at these events!