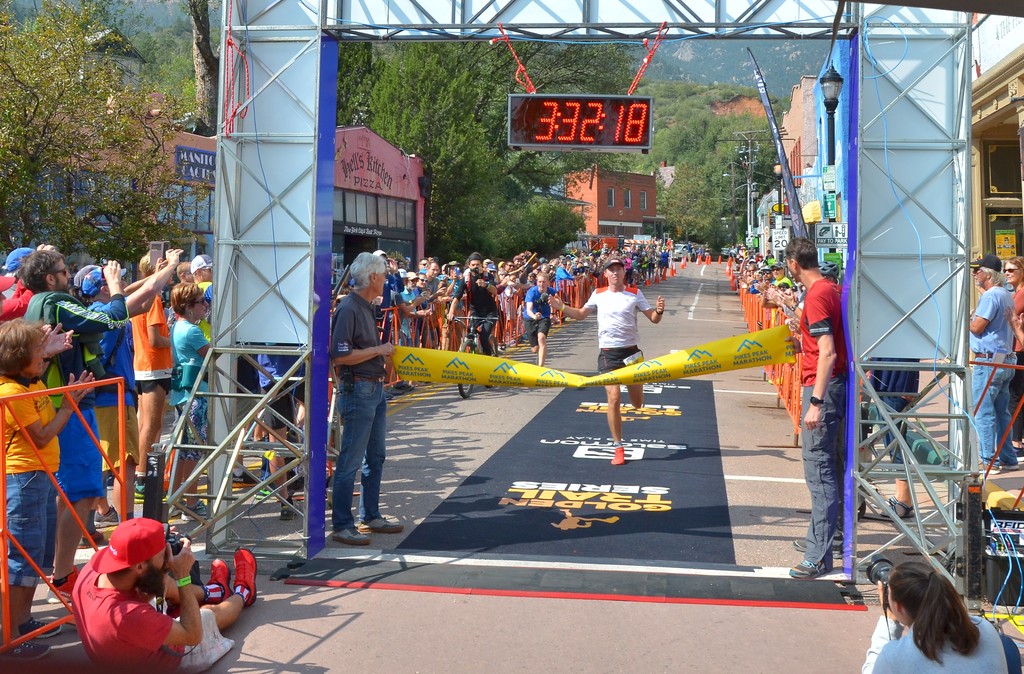 Dakota Jones warmed up for the Pikes Peak Marathon by riding his bicycle 250 miles from Silverton to Manitou Springs to raise money for his favorite nonprofit agency, Protect Our Winters.

“I got here Wednesday, and raised several thousand dollars by riding here on my bicycle,” he said. “That means a lot to me.”

Winning Sunday’s Pikes Peak Marathon meant a lot, too, as Jones showed genuine emotion when discussing what winning the prestigious race on America’s Mountain meant to him, especially after fighting through injuries a year ago.

“This is huge for me,” said the 27-year-old who lives in Durango. “The Pikes Peak Marathon is one of the most famous races in the world. To be on the list with the guys who have won it is an honor.

“There are only a few days like this where everything comes together in a big race. It feels great that I stuck with it through some injuries, and it’s great to be part of this (running) community.” His winning time of 3 hours, 32 minutes, 19 seconds came in his first competitive trip up and down Pikes Peak. He was about 16 minutes slower than Matt Carpenter’s race record, although he did eclipse Carpenter’s Pikes Peak Marathon descent record, running down the mountain in 1:13:53.

Jones’ time was exactly five minutes ahead of runner-up Oriol Coll of Spain. Darren Thomas of Steamboat Springs, who grew up in Colorado Springs, was third in 3:37:34 with Stian Angermund-Vik of Norway fourth in 3:37:48. David Sinclair of Peru, Vermont, was fifth in 3:38:04.

Jones figured since he lives in Colorado, he had an advantage over most of the runners because he trains at altitude. He had run Pikes Peak before, but never in the Marathon.

“I was fifth when I got above the tree line (at A-frame) and was working my way closer to the leaders,” he said. “I didn’t speed up; I was staying consistent, staying steady. When I got to the summit, I was about a minute behind.”

He was confident at that point.

“I don’t want to seem arrogant, but I have a good downhill,” he said. “I stopped at the summit and took two cups of water.”

Jones hit his stride on the way down.

“I was flying where it was smooth and flat,” he said. “I caught Darren Thomas at the tree line.”

Thomas, who finished third in 2016 and second last year, also couldn’t hold off Coll, who passed him with a couple miles left.

“I’m disappointed and satisfied,” Thomas said. “I had a (personal record) by 10 minutes, so I’m happy with the time. I pushed a little hard on the uphill and was aggressive.”

When he reached the summit, Thomas said, “I thought I would win. But Dakota caught me about two miles down from the summit. I had felt good but I had a rough downhill. I was stumbling and I fell one time. Maybe I was dehydrated.”

Coll, 23, was ecstatic with second place, especially considering this was just his third marathon and he doesn’t train at altitude much. At the summit, he figured Jones would win.

“I saw he was strong at the top and figured the altitude wasn’t a problem for him,” Coll said.

Jones isn’t competing in the Golden Trail Series sponsored by Salomon but Coll is, and said his runner-up finish will vault him into the top 10 of the standings.

Jones was thrilled with his victory, especially when he recalled the dark days of 2014 when he wasn’t fulfilled by running.

He worked through that, continued to run and found himself Sunday atop the podium of a race he’d long dreamed of winning.

“It’s been a nine-year journey to get here, with a lot of questions when I was hurt or wasn’t winning,” he said. “I was hurt a lot last year (mostly a hamstring injury) and that might’ve been a problem with over-training. I cut back on training and now I do a yoga and strengthening routine, and a lot of biking.”

He should enjoy the bike ride home even more after his big run on America’s Mountain.