The Leaders of the Pack: Pete Maksimow, Justin Ricks, Robby Young and Michael Weiss lead the charge early in the Fall Series No. 1 race on Sunday at Monument Valley Park. Young took the win. 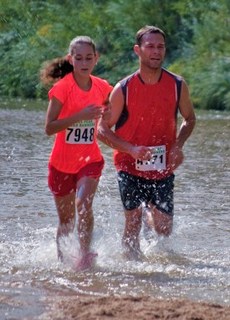 By Joe Paisely
PikesPeakSports.us
Kayli Tabares, 13, was proud of beating her father by seven seconds; even more so because doing so paced her to what will likely be the first of many women’s overall titles in the opening race of the Pikes Peak Road Runners Fall Series.

The 3.5-mile race on Sunday in Monument Valley Park was a unique challenge for all, especially first-timers like men’s champion Robby Young, 27, who also works as the Rampart High School head cross country coach.

He won the race in 24:11, despite falling twice during the ¾-mile stretch running through Monument Creek.

“I went down the first time because I was running along on one level and suddenly stepped into a hole,” he said. “I fell face-first. That was a big hole.”

He built a large enough early lead over runner-up Michael Weiss (24:37), 31, of Colorado Springs to hold on for the victory despite the face-plants.

Peter Maksimow, 33, of Manitou Springs, who placed second in the 2011 series, was sixth in 25:13. Defending series champion Alex Nichols of Colorado Springs did not compete.

Tabares, a seasoned veteran of the race at age 13, placed third in the series last fall. It was her first win in three tries in the 32ndseries opener. She avoided any stumbles in the creek although she caught herself once on a tree branch.

Runner-up Clare Bar (29:24) knew Tabares was the one to beat when he saw her along the starting line.

“I was hoping for first but when I saw here I knew it was going to be a tough race,” Bar said.

Bar, 25, of Colorado Springs was another race rookie. She was both excited and dismayed by the water depth, which varied from 1 to 2 feet, with the splash from other runners dousing others from head to toe. Many of the 504 entrants were soaked by race’s end.

The race course was much the same except the usual hay bales were removed for insurance reasons, said race director Larry Miller.

The key was only using natural obstacles, which the creek did plenty to provide.

“The depth was a little higher than usual because of the storms we have had lately,” Miller said with a smile.

The final half-mile is tweaked most every year, he added.

The race also used chip timing for the first time for increased accuracy.