Garden of the Gods 10 Mile Run hills are tough, Leonard Korir is tougher 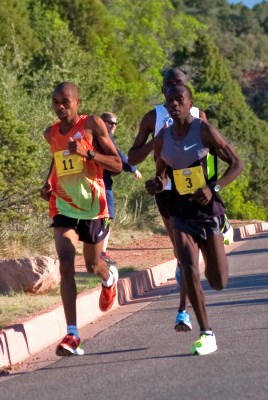 It was the only thing Leonard Korir could think about while powering through the monstrous ups and downs that have broken many a runner’s heart over the 37 years that the Garden of the Gods 10 Mile Run has been held.

The former NCAA standout at Iona College is no stranger to tough races, but said Sunday's race was the hardest he had he could remember.

“I knew there were hills, but I thought maybe just one, two, three…four at the most.  But after six miles I was still seeing hills, at eight miles I was praying!  With just two miles to go, it looked like five!”

Korir trains in Colorado Springs and grew up at 8,000 feet in Kenya, but said he has never gotten used to running hills in high elevation.

“The altitude affects me a lot…hills in altitude are so hard,” he said, adding that he prefers training at altitude and then racing at sea level.

Korir settled into third for most of the race, then made his move in the final mile to take the win in 50:48, seconds ahead of Ernest Kebenei (50:55) both men broke the previous age group record for men 25-29.  Daniel Kipkoech was third in 51:06.

The hills didn’t faze one of the youngest runners of the day, 9-year-old Alden Kruse, who shrugged when asked how tough the course was.

“I knew what was coming…I just tried to use my energy on the hills, just do my best,” Kruse said. 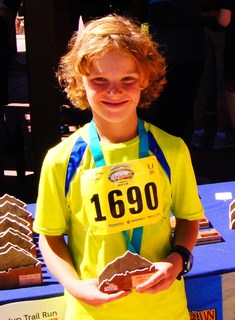 Kruse started running at 7 to help with baseball, and has placed at the Garden of the Gods 10 miler in both tries.  Last year, he was second in his age group, this year he finished third - but was a minute faster - with a time of 1:40:31.

Masters winner David Scudamora was also uncertain if he had won until he crossed the line. Picking people off as the miles ticked down, Scudamora said he knew he was able to pull away from some of the other top masters runners, but wasn’t positive if he’d passed all of them.

“Didn’t know for certain if the guys in front of me were old guys [chuckles] or not!”

Scudamora is used to racing at a high level—in 2000 he ran in the Olympic Trials—but says its been a new experience over the last few years as he’s delved into the world of masters racing.  After an eight-year layoff, he returned to running a few years ago and says it’s been a reinvigorating experience.

“It’s been fun coming back…I’ve rediscovered the joy of competing,” he said.

The race also served as the USA Track and Field Colorado 10 Mile State Championship. Andy Wacker of Boulder finshed fifth overall in 52:48, but won the state championship. Brandon Birdsong of Colorado Springs was second (53:18), followed by Jeffrey Eggletson of Boulder (53:56).